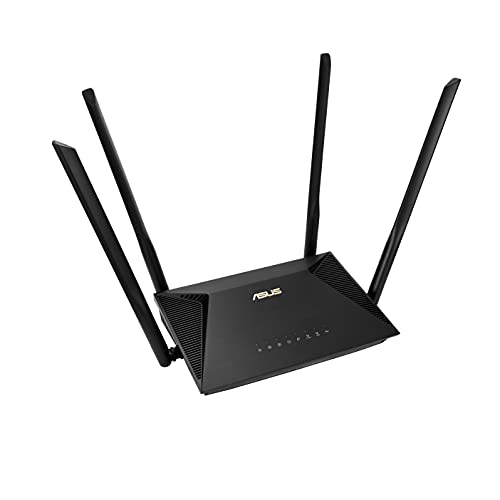 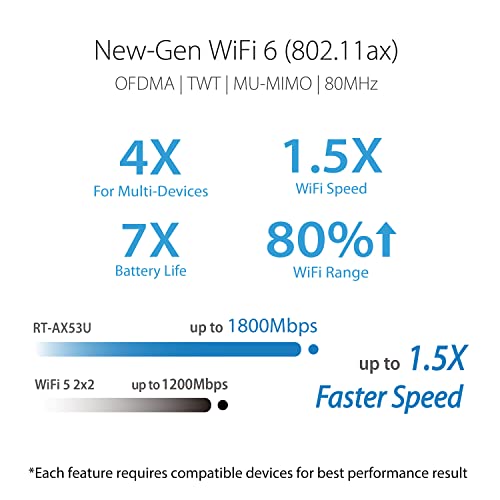 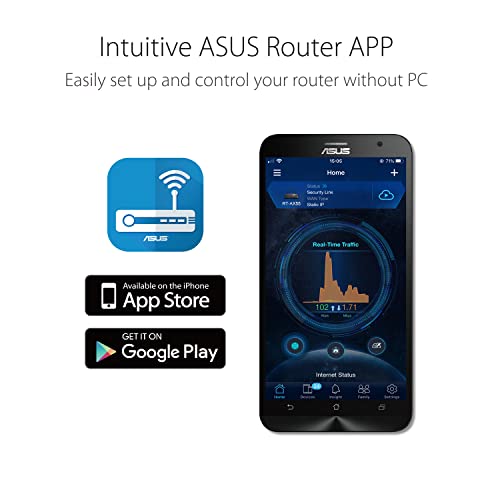 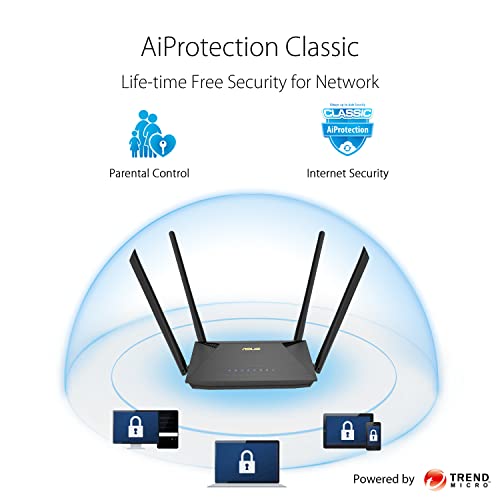 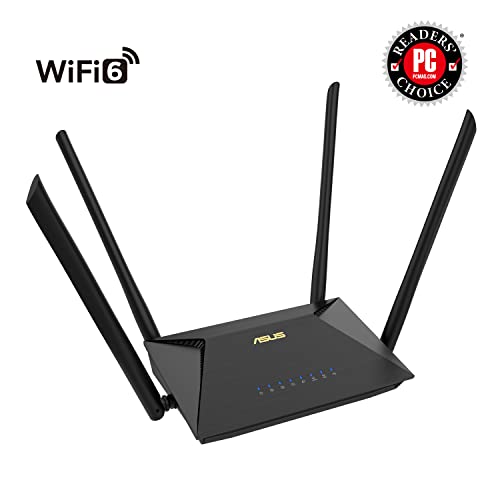 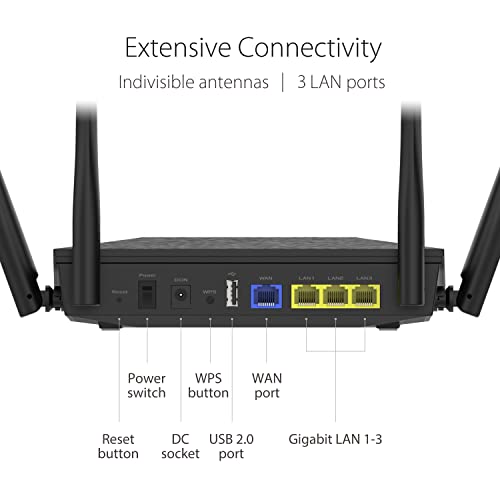 ASUS is one of Fortune magazine’s World’s Most Admired Companies and is one of the top motherboard and gaming brands as well as a top-three consumer notebook vendor. ASUS is driven by passion and innovation and dedicated to creating quality products for a future smart life, designing and manufacturing products that perfectly meet the needs of today’s digital home, office and person. Our wide portfolio includes MG248Q, Chromebox and a range of devices and components, along with AR and VR.

New-Gen WiFi Standard – WiFi 6(802.11ax) standard supporting MU-MIMO and OFDMA technology for better efficiency and throughput. Connect in your way – You can share the internet from 3G/4G dongle to the router by plug the dongle in a USB port. RT-AX53U supports 1024-QAM for dramatically faster wireless connections. With a total networking speed of about 1800Mbps 574 Mbps on the 2.4GHz band and 1201 Mbps on the 5GHz band. Increase Capacity and Efficiency – Supporting not only MU-MIMO but also OFDMA technique to efficiently allocate channels, communicate with multiple devices simultaneously 4 Gigabit ports – One Gigabit WAN port and three Gigabit LAN ports, 10X faster than 100–Base T Ethernet. AiProtection and Parental Controls – helps keep your network protected and allow you to set the time limit for a client’s network usage

With a revolutionary combination of OFDMA and MU-MIMO technology, 802.11ax technology provides up to 4X greater network capacity and efficiency in traffic-dense environments. Previous-generation 802.11ac WiFi can only handle one device at a time on each network channel, which is an inefficient use of available bandwidth. OFDMA support in the WiFi 6(802.11ax) standard divides each channel into small sub-channels, allowing signals from multiple devices* to be bundled together and transmitted simultaneously, reducing latency for a smoother, more responsive WiFi experience.

Better Battery Life for Your Devices

Target Wake Time (TWT) allows RT-AX53U to schedule designated intervals for devices to transmit data. This allows them to sleep when there is no need to wait for a router signal, reducing power consumption by up to 7X for significantly improved battery life.

With the latest WiFi 6(802.11ax) standard featuring OFDMA technology, RT-AX53U provides increased WiFi signal range and better coverage by dividing each channel into smaller sub-channels. These sub-channels have a smaller bandwidth that enables them to travel up to 80% farther1, resulting in a better WiFi connection throughout your home*.

Protection for your Home Network

RT-AX53U incorporates ASUS AiProtection, a commercial-grade network security system powered by Trend Micro Smart Home Network. With AiProtection, all connected devices are protected, even if they have no antivirus capability of their own — such as IoT devices. AiProtection blocks common internet-based attacks before they reach the network, and if an infected device is detected on the network, AiProtection instantly blocks it to prevent it sending any personal information to malicious servers.

Robust control and optimization with ASUSWRT

With the ASUSWRT dashboard UI, setup, monitor, and control network applications all in one intuitive area. With fast setup, multi-device detection, and flexible settings, ASUSWRT makes the most of your network performance. *xActual data throughput and WiFi coverage will vary from network conditions and environmental factors, including the volume of network traffic, building material and construction, and network overhead, result in lower actual data throughput and wireless coverage.

Ultra-fast WiFi Speed – RT-AX53U supports 1024-QAM for dramatically faster wireless connections. With a total networking speed of about 1800Mbps — 574 Mbps on the 2.4GHz band and 1201 Mbps on the 5GHz band.
Increase Capacity and Efficiency – Supporting not only MU-MIMO but also OFDMA technique to efficiently allocate channels, communicate with multiple devices simultaneously
AiProtection and  Parental Controls – helps keep your network protected and allow you to set the time limit for a client’s network usage;Control Method: Application;Security Protocol: Wpa2-Pskwpa2-Enterprise
Operating System: Asuswrt

There are no reviews yet.